Brendan grew up on the Clifton council estate in Nottingham. He is Nottinghamshire born and bred. At the age of 22 he was elected as the areas Conservative councillor.

Brendan was the first member of his family to go to university and qualified as a teacher.  He spent time in Romania as the Head of an International School and met his wife Andra.

In 2014 and 2019 Brendan was one of the Conservative candidates for the East Midlands region in the EU elections.  In 2016 Brendan campaigned to Leave in the EU referendum and helped the Vote Leave campaign here in Bassetlaw.

In May 2019 Brendan was elected as Conservative district councillor for Boughton and Walesby. The former Labour stronghold is a former mining community and he is the first Conservative to be elected for the area.

The Conservative Party in Bassetlaw launched its general election campaign on Saturday 9th December following the selection of Councillor Brendan Clarke-Smith as its parliamentary candidate.

Early polling by Conservatives shows the Conservatives ahead and o n course to win the seat in the December general election poll. 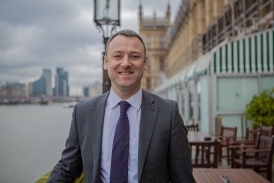