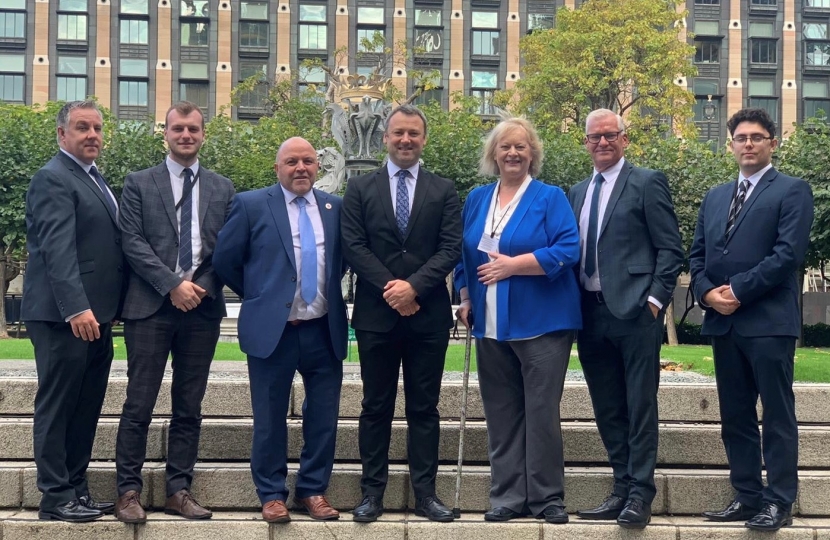 A group of Conservative elected representatives visited Westminster to discuss the Government's levelling up agenda with Ministers and Officials.

This visit included a visit to the Home Office to meet the Home Secretary, the Rt. Hon. Priti Patel MP to discuss the recent £550k awarded to Worksop. This funding was secured by Caroline Henry, the Police and Crime Commissioner for Nottinghamshire, as part of her plan to make Notts safe.

Speaking after visiting the Home Office, retired Police Officer and Nottinghamshire County Councillor for Worksop South, Nigel Turner said “I am really proud to have met and spoken with the Home Secretary. We thanked her for the Safer Streets funding which will enable us to improve policing in Worksop.”

Another meeting was with Paul Scully MP, the Minister responsible for High Streets. The Councillors were able to discuss with the Minister the current issues with the town centre and their views on how this can be turned around. Councillor Callum Bailey for Worksop North said ““I would like to thank Minister Scully for his time, and for being able to discuss Worksop Town Centre with him”.

Local MP Brendan Clarke-Smith said “I would like to thank the Councillors for coming down to Westminster to discuss the Government's levelling up agenda. Today, we had representatives from District, County, Westminster and our Police Commissioner working together in the best interests of the people of Bassetlaw.”

“I look forward to welcoming some of my ministerial colleagues to visit Bassetlaw in the coming months to see how the levelling up agenda is already having a positive impact in our communities.”